Today’s post is Part 2 of Seafood Nutrition, answering your questions on fish. In future posts, I’ll address fish oil supplements and sustainability/environmental concerns that you raised. In the last post, we covered differences between the five types of salmon, omega-3 content of various fish and shellfish, how cooking affects omega-3s, taste comparison between wild-caught and farm-raised salmon, and canned salmon. (If you missed the post, click here to read it.)

Question: Are salmon given dyes to make them pink?

Wild-caught salmon get their color from the food they eat, not from artificial dyes. If you’ve ever seen a pink flamingo (the real ones, not the yard ornaments!) they get their color the same way salmon do….from eating plankton rich in compounds called carotenoids. These compounds are broken down in the body to give the flesh a pink to orange to a deep red color, depending on the type and amount of food they consume. (Fun fact, humans who eat loads of carrots or drink a lot of carrot juice can develop a harmless condition called carotenemia…. the outer layer of skin, mostly seen on the palms of the hands, turn orange!)

Farm-raised salmon are fed a diet that mimics what wild-caught salmon eat, including carotenoids. While there is a lingering fear from various media stories that farm-raised salmon are injected with dyes, several news reports have corrected the inaccurate information, including Dr. Sanjay Gupta.  Click here to read more about setting the record straight.

Question: Does smoking salmon have any impact on the nutritional properties of the fish? 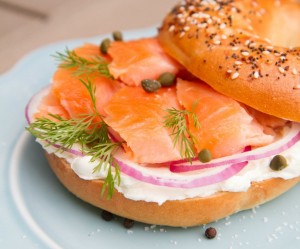 I reached out to Tom Sunderland of Trident Seafoods who has over 15 years of experience in the salmon industry. “Lox is related to the German “Lachs,” which is used to describe smoked salmon.”

As for the nutrition, the primary difference is the sodium. “The sodium levels are a food safety requirement related to packaging under vacuum. The FDA mandates a 3.5% minimum water phase salt level on any non-nitrated product sold in a vacuum pack as a botulism inhibitor (3.0% is the minimum if sodium nitrite is used). The main purpose of sodium nitrite is color retention, but it does have some anti-microbial properties,” says Sunderland. (In a post a few months ago we covered sodium nitrite and what “uncured” means when used in meat, so for a refresher click here.)

According to Food Data Central, the USDA nutrient data base, 100 grams (about 3.5 ounces) of salmon has about 60 milligrams of sodium whereas smoked salmon and lox ranges from 800-1200 mg of sodium in the same 100-gram portion. Keep in mind that 3.5 ounces is a hefty portion of lox and many people (my husband included, use about an ounce on their bagel.) So, if you’ve been told to keep your sodium intake low to manage blood pressure, go easy on the smoked fish by using a smaller portion.

And, soon I’ll be introduced to gravlax, a Scandinavian cured salmon, when we visit the north lands for an anniversary trip! (Stay tuned for more on that.)

Question: Is Arctic Char as good as salmon?

I assume the question relates to nutrition and not taste, as taste is subjective, but the nutritionals are similar. Arctic char is a member of the Salmonidae family and found in cold-water lakes in the polar regions. “Most Arctic Char is imported from Iceland and Canada,” says  Valerie Agyeman, with Seafood Nutrition Partnership. She says that it has a “delicate texture and mild flavor, similar to trout and is a fattier fish than salmon.” Because of the higher fat content, it has about 1 gram (1000 milligrams) of omega-3s per serving.

For those unfamiliar with this fish, Agyeman says its “flavor appeals to people who enjoy trout but find salmon too strongly flavored.” As for cooking, she says cook char as you would trout. “Fillets and steaks can be broiled or cooked on the grill, while whole fish can be baked or poached. The skin becomes thick and leathery after cooking, so it’s best to remove it before serving. The oil content makes char also a good candidate for smoking.”

Question: Is frozen fish as healthful as fresh fish? Some frozen fish has added phosphates, why?

According to Christine Garvey of Trident Seafoods Corporation, some consumers think fresh fish is the premium offering. “Fresh fish is fantastic when it is truly freshly caught and not over a week old before it is consumed.  Unfortunately, when purchasing fresh fish, it is often impossible to know when that fish was caught and how it was handled through the supply chain. But, when fish is flash frozen at the source, I consider it the best quality fish available, typically frozen within hours of being caught.”

As for the addition of phosphates, “Alaska seafood companies do not use phosphates in processing fish in Alaska,” according the Michael Kohan, of the Alaska Seafood Marketing Institute.  However, phosphates are an approved additive and some markets, such as Asian and Chinese markets, have long transit times to get their seafood to market so phosphates are used to improve the quality of the product. “Phosphates are added to preserve the moisture content of the fish during freezing to preserve freshness. When phosphates are used, they are declared on the label,” says Kohan.  Many people are looking for “clean” labels on foods and think the fewer additives, the better the product. While that is not necessarily true, those who are looking for fish without phosphates can choose Alaskan seafood, processed in Alaska.

Since my trip to Alaska I’ve become hooked on flash frozen wild Alaska Pollock, a cousin to cod with a mild taste and flaky texture. Try it broiled with lemon and thyme and a drizzle of olive oil, pan friend with seasoned panko bread crumbs, or blackened for fish tacos. One fillet (slightly over 4 ounces) has 80 calories and 19 grams of protein and is a great source of omega-3s, so it is a nutrient-rich choice for those over 50 years of age who want to keep calories in check while getting quality protein. And, try a wild Alaska Pollock burger for a change of pace on the summer grill.

I hope I’ve answered your questions on seafood nutrition, but if not, please let me know if you have lingering questions. Some people say seafood is too expensive, but as Linda Cornish, President of the Seafood Nutrition Partnership, put it, “There is a perception that seafood is expensive, but chronic disease is more expensive!” So, take the pledge to start eating seafood twice a week!  Click here for delicious seafood recipes to help you keep the pledge!

Disclosure: I attended a sponsored travel program by Trident Seafoods where I got a deep dive (pun intended) into all things seafood and got introduced to helpful people and resources for evidence-based information on seafood. I was not compensated or asked to write this post. All of the questions came from my readers.

First, let me wish you a Happy Older Americans Month; May is the month when we celebrate those of us in the “older” demographic! May coincided with a conference that I participated in and the timing was perfect. 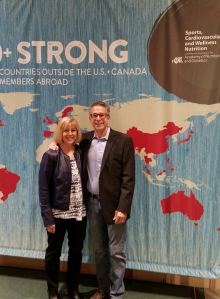 Last week, my co-author, Bob Murray and I delivered a presentation to a group of sports and wellness professionals in Keystone, Colorado. The theme of the conference was “No Limits Nutrition,” and when it comes to older, active adults, there are no limits on eating well, moving well, and being well.

Here is a summary of our presentation. We started with some demographic facts, but I don’t want to bore you, so here are a few of  the statistics that I found most interesting:

I think we would all agree that we want the extra 20 years to be healthy, functionally fit, and independent. I’ve never heard anyone say, “I wish I was in a nursing home and had to use a walker to move around.”

There are some changes in every body system as we age, but it is hard to untangle normal aging from usual aging when disuse is the norm. Muscle is the most plastic of tissues, meaning that it can readily adapt to exercise and nutrition to regain function.

A double whammy can occur when we get older with something called “anabolic resistance,” meaning that older muscle is less responsive to the stimulating effect of dietary protein and exercise. So, what can we do?

A Prescription for Muscle Health

Don’t forget to get the heart moving!

Aerobic exercise is also important; don’t forget to get your heart pumping and lungs working to deliver oxygen to working muscles. Focus on getting a minimum of 150 to 300 minutes a week of moderate-intensity exercise (like brisk walking to raise your heart rate and breathing) or 75 minutes of high-intensity exercise (like jogging or swimming laps). Bob suggested these simple steps:

So, to answer the question is 70 the new 40? We like baseball player, Satchel Paige’s answer!