Each day dozens of research studies appear in my inbox, peaking this old college professor’s interest. Last week, there were three studies that made me want to take a closer look: one published in an aging journal, one presented at an annual scientific conference, and one animal study in the journal Brain Structure and Function.  Let’s briefly talk about each one and how it might translates from the page to your plate. 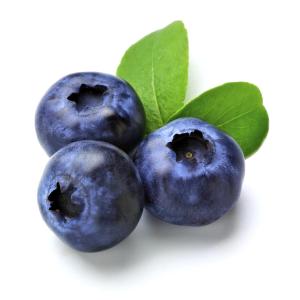 The blue color in blueberries is due to the presence of anthocyanins (pronounced ann-though-sigh-a-nins), a sub-group of plant chemicals knows as polyphenols. Fruits and veggies that are deeply colored red, blue, and purple are especially rich in anthocyanins. The study published in the Journals of Gerontology (gerontology is the study of aging) found that eating about a cup of blueberries twice a day lowered blood pressure similar to the lowering from taking common blood pressure meds. The effect on blood pressure was both acute (happened quickly) and chronic (over time). Researchers found that the anthocyanins relaxed blood vessels and reduced the stiffness that occurs in aging blood vessels. As we age, our blood vessels lose their elasticity making it harder to control blood pressure and increasing our risk for heart disease.

What does in mean for you?

Eat more blueberries! One cup of berries, whether fresh or frozen, has about 60 calories, making it a low-calorie addition to your diet. What it doesn’t mean is taking a blueberry concentrate supplement (yes, they do exist). Researchers note that blueberries are also rich in vitamins, minerals, and fiber and the synergistic action between them and the anthocyanins might also be a reason for their health promoting powers. So, food beats supplements!

Pomegranate: Can it juice your memory?

Pomegranate juice is rich in polyphenols called ellagitannins (pronounced eee-laj-ah-tan-ins). These antioxidant compounds are in plants to protect the plant, but when we eat the plant, their protectors come along for the ride. The research, presented at the 2019 meeting of the American Association for Geriatric Psychiatry, described how a daily serving of pomegranate juice improved visual learning and retention of learning in a year-long study with older adults, average age of 60. The study was a randomized, placebo-controlled, double-blind study; a design that is considered the gold standard in nutrition research. What that means is that study participants were randomly assigned to either drink 8-ounces of pomegranate juice or 8-ounces of drink that looked and tasted like pomegranate juice but contained none of the active polyphenols. Double-blind means that neither the participant nor the researchers knew who was getting the real juice or the placebo. Dr. Gary Small, director of the University of California (UCLA) Longevity Center, presented the current research at the scientific conference, building upon similar work that his group published in 2013 in the Journal of Evidence-Based Complementary and Alternative Medicine. In the 2013 study, a similar design was used but the study was short-term, only lasting one month, but the results were similar. So, the researchers wanted to know if a longer-term study would show memory benefits, and it did.

Researchers are not sure exactly what it is in the pomegranate juice that showed the positive results. One interesting theory is that the pomegranate juice works though the gut microbiome. The healthy bacteria in our gut can breakdown the ellagitannins to a compound that crosses the blood brain barrier, exerting its beneficial effect through the gut-brain axis.

What does it mean for you?

Vitamin D: Good for the Brain?

The third study is on vitamin D deficiency on processing new information and retaining it for future recall. It was conducted with mice and I always cautioned my students to count the legs on the research subjects before considering if it is relevant to those of us on two legs, but this study is interesting in understanding vitamin D deficiency and the brain. Vitamin D is most often thought of as a bone-building nutrient because without enough vitamin D only 10-15% of dietary calcium is absorbed. Yet, vitamin D has many roles in the body, including cognition.

Older adults are considered “at risk” for vitamin D deficiency because our skin doesn’t convert sunlight to vitamin D as readily as it did when we were younger and vitamin D isn’t found naturally in a lot of foods. Some foods, like milk, are fortified with vitamin D, but many yogurts are not. (The only way to know if your favorite yogurt is fortified with vitamin D is to read the nutrition facts panel and ingredient list on the container.)  The recommended dietary allowance for vitamin D is 600 IU for those 51 to 70 years and 800 IU for those over 70. The upper limit is 4000 IU and many older adults take a supplement of 1000 IU to make sure they are getting enough vitamin D. Check with your doctor and ask if a vitamin D blood test is needed to tailor your vitamin D intake to your blood level.

What does it mean for you?

Choose vitamin D-rich foods, either naturally occurring or fortified (for an extensive list of vitamin D in foods click here.)

Eat more deeply colored fruits and veggies, including blueberries and pomegranate juice, to get healthy plant compounds in your diet. And, choose vitamin D rich foods, like salmon or tuna, and fortified milk, yogurt, and cereals. Here is my breakfast plan:

While the research is promising, this breakfast may or may not improve my brain health, but it gives me a great start to the morning with three servings of fruit and a good dose of fiber in a calcium and vitamin D-rich breakfast bowl. And, did I mention it tastes great?

For more information on how foods and fitness affect brain health check out Food & Fitness After 50.

Disclosure, I am on a clinical nutrition advisory board for POM Wonderful, but I was not asked to write about pomegranate juice or compensated to write this post.